in the middle of nowhere – exhibition gallery kalo Tirana, 2016 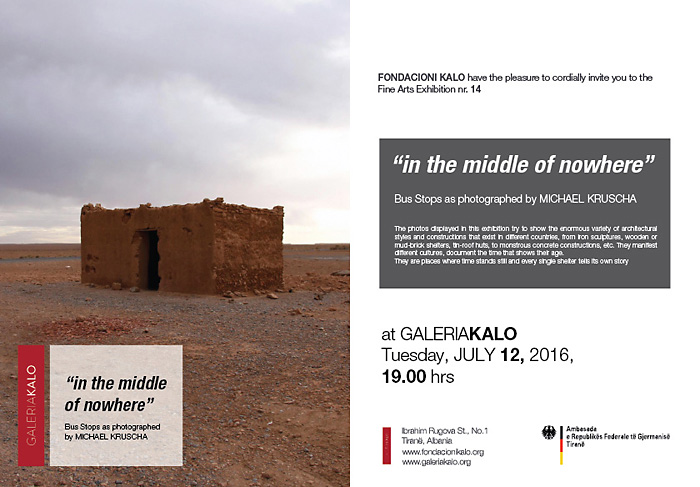 En Route through the Desert:  Bus Stops—Way Stations in the Boundless

We encounter them en route; on a journey, on the wayside, along a street that takes us to some other place, somewhere, and nowhere, into nothingness. They can be found all over the world, are familiar to us and are nonetheless alien, since they appear in a wide variety of forms in the most remote regions, off the beaten track and wonderful: Bus Stops—often unexpected and unprepossessing, or imposing, quirky. Michael Kruscha photographed bus stops while traveling over several years, in many countries, on many continents, around the world. His series comprises images from Eastern Europe, Kazakhstan and Armenia, the Arabian Peninsula and the Near East, northern and southern Africa, South America, even Asia.

He is not the only artist to be inspired, both conceptually and aesthetically, by this motif. But what is it that makes these simple, profane structures so alluring? They are common property, are open to every man, every woman, and invite us to stop. We all know and use them, linger in them, waiting, wanting to go forwards, ahead. Or we wait for, want to receive, to fetch, someone. Functionally reduced to the stopover, they are rudimentary architectural structures, way stations on endlessly recurring journeys. They embody mobility and change, quite in keeping with everyday life today.

Bus and station manifest classic travel motifs in every culture on earth. Buses have for many decades and today still serve as an important, irreplaceable means of transport, especially in regions where owning one’s own automobile is rare. Might this status predicate these architectural forms, diverse and elaborate, original to artificial? In comparison with the norms standardizing the bus shelters of Western Europe, those in Eastern, socialist-oriented countries seem expressive and unique, and become a subject of art.

Many artists have chosen the bus stops of the East as a motif and developed their own conceptual strategies. They mark stages of Anne Tretter’s journey through Poland, from art space to art space; they show inhabitants and locations, city and land, one time densely bustling, one time isolated, quasi as a securing of evidence. Christopher Herwig has documented structures in the former Soviet states, while focusing on these curious structures and only capturing the surroundings, albeit fragmentarily. Michael Kruscha also presents images from the East, but has also turned his eye to the global.

The starting point was a trip to Oman in 2003, a land of extensive desert areas, where nothing obscures the view to the horizon—except these bus shelters, on lonely roads that channel hundreds of kilometers through deserted country. Here bus stops seem paradoxical: who would want to embark or disembark in this uninhabited area faraway from all civilization, faraway even from vegetation? Here, the structure reduced to its sole function even seems to be completely robbed of this function. A monument to human civilization in the desert, a product of art for art’s sake?

Kruscha has traveled through regions with diverse climatic conditions and cultural realities: he has discovered remote stops on country roads, transit routes, way stations on open plains, varying in material, design, and condition: not only in the East are there structures between decorative architecture and futuristic sculpture, with reliefs, paintings, mosaics or sculptural forms, geometric-abstract or richly embellished with ornaments or figures. They are made of stone, brick, concrete, iron, corrugated sheet metal, plaster, ceramic, glass, wood, or fabric. Some are serially produced, some created individually, others originally designed or only provisionally erected.

If the prefabricated housing estates of the nineteen-seventies and eighties in Kazakhstan embody socialist homogeneity, the design aspirations of the bus stops there seem unlimited: walls of prefabricated plasterboard are strikingly painted, provide a stark contrast to the grayish-brown wasteland, and signal function and aesthetics at the same time. The bus shelter in Punta Arenas looks cozy and luxurious: white and blue metal walls with windows, a gable and canopy. The structure in Nizwa, with its arch, column and capital elements and Islamic style, bright white plaster and a brown wall relief on the outside, seems elegant, like a small palace in the middle of the arid surroundings.

The shelter at the fork in the road in Wadi Arabah even has two levels, and shows signs of lively travel activity. A route used internationally, regulating traffic with Arabic and English lettering on the asphalt, with a sign on the roadside at the back—only intimated in Kruscha’s photograph. Counter-models are bus stops in Shibam, Wadi Rum, or Ta’izz, which are radically reduced to function: a bench for sitting and waiting, a roof above. While colder or higher-lying regions necessitate measures against precipitation, cold, and wind, here, there is only protection against the sun.

Other structures look like bunkers, set into the stony brown desert without windows, squat and dark. Dilapidation characterizes many bus stops around the world: peeling paint, crumbling plaster, dirty walls, some already shored up, some falling down, others hardly anything more than batten frameworks or a rusting shell. Time becomes tangible on many levels: the moment of capturing the image apprehends not only what is recorded, but also concretely the period of change, of the temporary structure, and, imaginatively, of time spent waiting, as part of a lifetime—contrasted with the infinite time of nature, which there seems unchanged over millennia.

The subject interlaces an attestation to architecture and landscape panorama, is indebted less to the principles of travel journalism than of art. The images radiate contemplative calm, their only event the occurrence of these deserted structures, positioned along the road proceeding across the plain horizontally or vertically up to a mountain range on the horizon. The “cropping” of the motif results in abstraction: a cube, a point on a line in space. The colorfulness bolsters the spatial concept: two horizontal zones regulate the image, earth and sky, circumscribed by a band of mountains, before which only the structure stands out.

Besides the focus on space and time, light is also an aesthetic means. Particularly on white walls, the shadows cast by beams, poles, or pillars create optical lines that supplement the material structures—an interplay of black and white, of appearance and essence. In Beersheba the shadow doubles the light-dark stripes of the roof battens; a cloth stretched on beams with its shadows falling underneath in the Atacama Desert gives rise to associations with sailboats. The light captured from a deliberately selected perspective.

Kruscha’s eye and manner of composition have been schooled by his painting, since his photographs are preceded by many series of paintings, also dedicated to foreign lands and mobility. He also used the camera to create study material for these series, but the new medium soon became established as an autonomous art that he exhibits around the world on an equal footing. If his paintings are characterized by the alienation, transformation, and abstraction of what is concretely perceptible, his photography shows the concretely perceived alien world as an abstracted space-motif using painterly means.

The coloration features contrast: color-in-itself contrasts off-white structural elements, colorful compositions and blue sky emphasize geometric delimitation—or monochromatic nuances of natural-colored structures on the desert ground under a cloudy haze harmonically form a blue-gray-brown unity. Both emphasize the three-dimensional; a cube stands out sculpturally from its surroundings, as a shape in front of a shapeless background, in boundless space. Polar is the synthesis of architecture and landscape, the constructed and the grown, civilization and nature.

Michael Kruscha shows emptiness, an absence in both, making reference to archetypes of space-time, of material-light, to a purely imagined event. The scene seems paradoxical almost in the existentialist sense of Samuel Beckett: a waiting for something in a nothingness that is itself abstracted from waiting and anticipating. What remains is only the site of the event: something internal is delimited in the exterior of endless expanse, something defined in the undefined, a way station in the boundless.